A little bit of an update as to how we’ve been getting on at the last few BDS rounds, at Fort William and more recently Llangollen.

Unfortunately Fort William was a bit of a wash out…We arrived Thursday night and the sun was shining but it was not too last. We had gone up a day earlier to ride Friday to get a bit more practice in, after 4 runs with good mate from the South West Kye Forte we had started to feel comfortable on the super long track. On Saturday there were rumours of wether practice was going to run due to the super high winds, we were sat in the cafe when the announcement was made that practice was to be cancelled as the gondola could not run with the high winds. Saturday then changed to a push up practice format not even quarter a way up the track starting from just above the Silverline wall ride, a bit disappointing and considering I had rode Friday I decided not to ride and save energy for the Sunday race when everything was meant to return to normal.

Unfortunately things did not improve Sunday morning, a fresh layer of snow overnight meant that there was no way the race was going to be run from the top and that the race would be run as a push up from the Silverline wall ride like practice on the Saturday. It was very disappointing after travelling all that way from Devon but never mind everyone was in the same boat so went straight into the race as normal. The race didn’t really suit my strengths as it was on the most pedally physical part of the track, when I prefer the much more steeper gravity fed tracks. I had a relatively clean run but struggled for the motivation on such a tame section of track and ended up finishing 26th/38 in the Expert category.

Next is on to the complete opposite to Fort William, which is not crazily steep but flat out and rocky, Llangollen is crazily steep and even challenges the best in the world. I had a great result here last year so was excited to get back and try to do the same. Travelling this time with another fellow South West racer and good friend Ash Mullane, check out the video bellow of what we got up too and Ash on the way to a 3rd place in the Masters category!

After doing a bit of trail riding at Llandegla trail centre we got the venue Friday afternoon to setup our pits then have a walk of the track which as knew was steeper and crazier than ever. The top woods is out of control drops and some pretty wild chute lines (pictured bellow), then as it comes towards the end the hill is still pretty steep but just turns into easily some of the best turns in the country, so much fun.

Racing went ok at Llangollen, in seeding I had two stalls in the top section but other wise clean and finished 28th in category. With the mistakes I had I was feeling confident with a clean run I could put in a good time. In my finals run it didn’t quite go to plan as I ended up wrapping myself around the tree covered in tape on the right hand side of the picture above. I got going again and had a good bottom section to finish 33rd in the Expert category which was not what I really wanted but I still had a rad fun time so all was good. I even picked up a 8th through the speed trap on 27.5 mph! Until next year Llangollen! 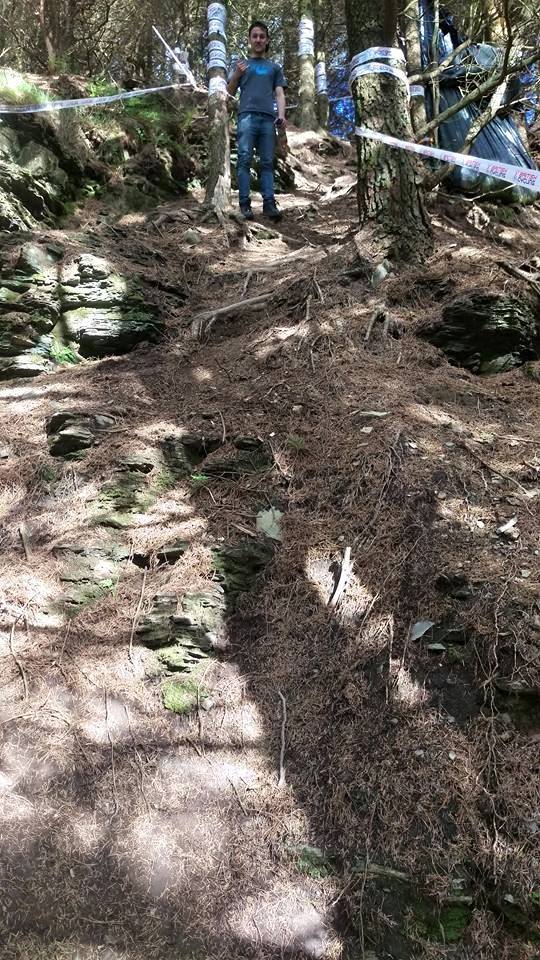